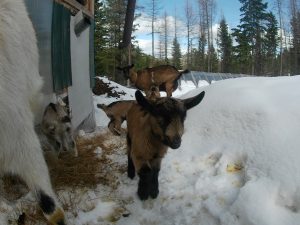 We are now 2 weeks from her traumatic birthing experience and she is doing wonderfully.  At no point did she threaten me with uterine infection or complications.  PHEW!  She’s stayin’ plump and lookin’ beautiful as ever.  Never did I envision myself someday following a female goat around, carefully sniffing her vulva and noting how it smelled each day…

We have each doe down to 1 kid each and are milking the ladies twice a day.  To prep the kids for rehoming as bottle babies, once they were 3 days old we separated them from the does for 4-6 hours in the middle of the day, then milked the does and offered the milk back to the kids via bottle.  It was hit and miss the first few days because the kids still had big full milk tummies even after 4 hours.  Extending the separation to 6+ hours made certain that the kids were hungry enough to suck the bottle down.    This process helps them transition better to the bottle.  We rehomed them around 10 days old and ideally would have done it sooner, but we had some delays with the first buyer who wanted multiple kids and it ended up falling through.  But it all worked out in the end, and 3 of the 5 kids are off to new homes as future pack goats.  With any luck the last 2 will find homes soon, otherwise we may need to keep them until they’re weaned.

So here we are, rich in milk again.  Finally!  We’re claiming nearly 2 gallons per day, each doe milking competitively.  I thought for sure Tisl would not be as strong of a milker 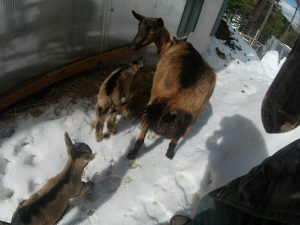 as Ruma since her bag is half the size.  But there’s another great learning lesson- bigger bags do not necessarily equal more milk!  We’ll find out for certain if/when these two remaining kids find new homes and both girls are giving 100% to us, but I suspect Tisl will keep up the pace.

Each day we make a big batch of fresh, soft vinegar cheese.    It’s crazy simple; heat the milk to 180-200º (we shoot for 200º since boiling point is higher at this elevation), take it off heat, and stir in vinegar.  About 1/4 cup per gallon usually suffices. The milk curdles within second of adding vinegar and within a minute it’s ready to strain.  The longer you let it strain the drier the curd will be.  I rarely drain/drip the cheese for more than 5 minutes.   This leaves plenty of moisture (whey) in the curd, which will separate when you move the curds onto/into a container.  When I add herbs, I knead that whey back into the curd and it actually re-absorbs it, making a softer, creamer cheese.   What vinegar to use?  Distilled white vinegar leaves almost not flavor in the cheese, but is both a corn byproduct and most likely a product from BP (British Petroleum, who produces the majority of the world’s vinegar). Until we start making our own vinegar, we try to at least opt for organic options.  Apple cider vinegar curdles the milk really nicely but does leave a sharp sweetness to the cheese.  The salt and herbs I knead into the fresh cheese complement the ACV’s flavor very nicely, so I don’t mind.  Any 5% vinegar will work, each will have its own flavor profile. 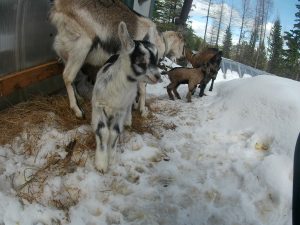 Perhaps I’ll make a post dedicated to the process in depth.  But really, it’s super easy and fast.  We’ve tried other soft cheese, I even made mozzarella once, but the processes were lengthy and complicated and require special cultures, and frankly the vinegar cheese tastes better, even if it doesn’t melt and stretch luxuriously like cultured cheeses.

We also sell on Etsy!
Check out our solid 5-star reputation with over 10,000 sales!
*Our Etsy prices are higher than you will find here due to Etsy's vendor fees.
To view our full inventory, check our Etsy Shop. Many items on Etsy are unique and not available here. You may still order those items through this website for a discount though, please inquire!