I made this little comic because this particular story is a funny, expressive tale I enjoy telling, but it just doesn’t quite fit into text.  Text alone can’t capture the emotions of the event.  To some the humor in this story may seem a bit morbid, but it all depends on your perspective.  We take it lightheartedly- thus is life living in an area loaded with wildlife.  And no, we didn’t go back to look, but we considered it!

The comic is about 70 seconds long and 10 megabytes in size.   It contains no graphic or explicit content.

I don’t make little animations like these to create masterpieces.  I put just enough time in to convey the story effectively.  Please pardon any funny little quirks in the graphics 🙂  I only spent a few hours on it.

I was on the phone when I heard our 5 week old puppy, Neoma, start yelping on the hill behind the house. It was the first time she’d ever ventured that far out.  I listened keenly, assuming she was simply distressed upon realizing how far she was from her mother and siblings. I listened to her come down the hill, around the cabin, and toward the front porch, whining, but not in a way that alarmed me. But when she got to the front porch she exploded in hysterical screaming. I quickly hung up my phone call and ran outside.

She sat on the front step, blood coating one side of her face. I rushed her inside.  Blood was soaking her face and my mind was racing; “What happened? WHAT DO I DO?!“ 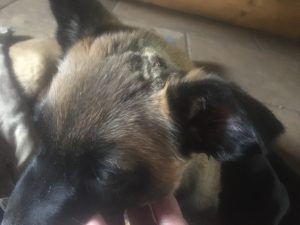 I couldn’t do anything for her, I couldn’t touch her face. She was a mess; a screaming, hysterical, terrified mess of a tiny dog.

I was genuinely worried her heart would give out from the level of her distress. 5 minutes passed, I paced the house with her, trying desperately to console her. 20 minutes had passed, still she screamed relentlessly at the top of her lungs and the bleeding wasn’t letting up. I couldn’t touch her face without cranking her hysteria up to the next level.

And then I had a (reluctant) revelation. How have I sedated dogs in the past? I paid a visit to my precious supply of strictly medicinal (seriously) cannabis oil. I factored what kind of a preciously minute amount would be appropriate for such a tiny dog- not that a large dose could hurt her, because it can’t, but I didn’t need her sleeping for 2 days straight. I rubbed a tiny dab into her gums and paced the house with her for another 10 minutes. Her hysteria turned to exhaustion and her piercing screams turned into sleepy crying. I paced for another 10 minutes until she was asleep.

Using cannabis-infused oils for sedation is safe and effective.  For a long time I used it very conservatively, worried what might happen if I dosed a critter too high (no pun intended).  Then, one day, the mastiff puppy Rowan got up on the kitchen counter and stole a plastic measuring spoon filled with pot butter.  The spoon contained about 1 month’s worth of daily doses for Mili the Dog, who was contending  with severe health complications (that’s another story).   So Rowan ate a month’s worth of sedating doses in 1 sitting.  He could have stolen peanut butter, or bread, or any number of things, but no, he stole the spoonful of oil, ate all the oil, and half the spoon.  ROWAN!!!
Through the next day Rowan hunkered down on a dog bed on the porch and slept fitfully for over 12 hours straight.  He barely responded when addressed, his eyes were unfocused, and everything he did was delayed, almost in ‘slow motion’.  If you cooed at him his tail would wag….  wag…. wag…. wag…. wag…. at a hilariously slow rate.  We kept a sharp eye on his well being- he was otherwise fine.  He never threw up, his bowels were unaffected, his vital functions were stable.  I was stressed beyond belief.  Andy laughed and assured me he’d be fine.
After 48 hours Rowan was starting to feel himself again, albeit very hungry.  And by the next day he was totally back to normal.
This haphazard learning experience taught me not to fear cannabis overdose in animals. 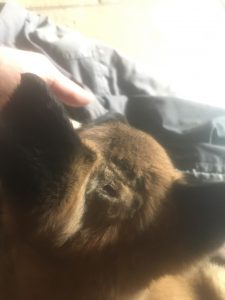 At this point I was able to set her down on the bed, clean her up, clear my head, and figure out what the heck was going on. After much fussing and many bloody swabs, I revealed a slice across her scalp, a small puncture in her cheek, and a disconcertingly deep puncture inside of her ear. There was a pin-prick sized hole almost and inch down inside of the cartilage folds of her tiny ear.

Apparently a hawk had tried to snag itself a canine luncheon. Raptors strive to pierce their prey through the ear into the brain for an instant kill. But this bird missed; its talon went harmlessly into the cartilage rather than into her skull.

My first task was to trim hair away from the wounds with scissors so I could discern how large they were and keep the fur out so they could heal. My second task was to discern whether there was damage to the ear itself and to keep the blood from pooling or caking inside the ear. Allowing the blood to fill and scab over in the ear may lead to long-term damages or scar tissue build up inside the ear, affecting both balance and hearing.

Using cotton swabs I was able to pinpoint where the hole was and was relieved to find it wasn’t piercing anything but flesh. Her ear was not damaged. I cleaned her up and applied an antiseptic, soothing salve to her cheek and scalp wounds. I kept her ear swabbed with alcohol to keep it sterile.

Her cheek and scalp wounds healed up quickly enough, but her ear continued to bleed for almost 4 days. Not a dangerous amount, but I had to sedate her lightly each day to remove the blood up and clean her ear.

Within a week or two she was back to her normal self, though she didn’t wander off alone. She had psychological trauma from the incident that took the first few months of her life to overcome; afraid of her ears being touched, afraid of being ‘snatched up’, etc. Thankfully there is no lasting or residual damage from the event.  She had a funny hairdo for quite awhile though!  I often wonder what she thinks when she looks up at the sky and watches the birds.

Me: “What?”
Him: “I went to see why ravens were gathering in the pasture.  I thought he was dead, but he’s just stuck.“
Me: “How is he… stuck?”
Him: “Come check it out.”
We go investigate Bill the boar.  Bill the 1,000lb Hampshire boar.  Indeed, Bill was accustomed to sleeping on the steep dusty hillside.  He normally laid down with his feet facing downhill, making it easy to roll over right into a standing position.  But this time he laid with his feet pointing uphill.  Now he was stuck, almost on his back, with his short, fat legs poking helplessly up into the air.
The ravens know a down piggy when they see one! They knew he wasn’t getting back up on his own and were gathering in anticipation of his eventual death.
We tried a few times to simply heave Bill over onto his other side.  But as you can imagine, a 1,000lb pig kicks with a lot of strength.  He was tired and cranky and didn’t appreciate his legs being used as handles and levers.  Flipping him over wasn’t going to be that simple.
Our next plan of action was to dig a trench on the downhill side.  In theory, we’d just give him a little tip and he’d plop over onto his other side in the ditch.  It sounded reasonable enough, so we dig the trench out and prepare to heave Bill once more.
“One, two, THREE!“ 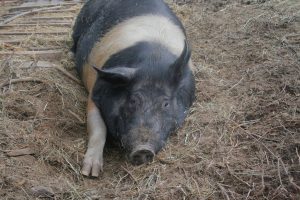 We levered Bill backward with his thrashing legs and sure enough, he flipped right on over.  But he didn’t roll into the ditch.  Bill’s massive frame caught air and the giant pig went flying down the mountain side.  We watched in horror, both of our minds instantly conjuring scenarios of what happens next and how we’re going to extract a 1,000 pound carcass that’s wrapped itself around a tree at the bottom of the draw…

Bill flew downhill about thirty or forty feet, and like a half-ton cat he righted himself in mid-air and landed on all four legs with a jarring thud, just in front of the first big conifer trunk in his path.  We were both stupefied and relieved.
Bill saved himself and lived to see another day.  It wasn’t too much later though that we had to butcher him.  A pig that large is just… too large!  The event of butchering Bill is a story in and of itself…
Categories: All Posts, Tales from 2019
Tags: close calls, funny stories, pigs, problem solving
We also sell on Etsy!
Check out our solid 5-star reputation with over 10,000 sales!
*Our Etsy prices are higher than you will find here due to Etsy's vendor fees.

(Notice there are no ads? We intend to keep it that way!)

***We are currently snowed in and will not be shipping any orders until sometime in March. I will update this notice as the weather changes and conditions improve. Email me if you have any questions :) - Jen Dismiss