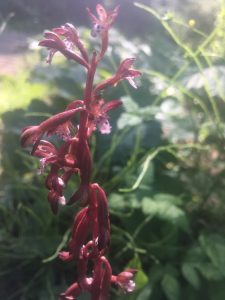 I wanted to talk a little bit about the medicinal herb Coral Root.  Members of the Corallorhiza family are many, and most of them are endangered.  In our forest we’re lucky to have a variety of coral root that is not state or nationally endangered.  Coral root is an orchid.  It’s entirely parasitic.  It produces no leaves and contains no chlorophyl.  It survives by leeching nutrients from the roots of the plants around it, as well as being fed by mycelium and other generous members of its ecosystem.

The ‘root’ of coral root is what we harvest for medicine.  Coral root doesn’t actually have roots.  It has an elaborate network of finger-like rhizomes that grow in segmented fashion, curling in on themselves and encasing anything they curl around.  The root ball then, which is technically a rhizome ball, is a tightly-knit wad of little segmented fingers.  Anything from roots to rocks become encased in their grasp.

The rhizomes, unfortunately, smell like urine.  Both fresh and dried.  I really wish they didn’t, because I love this herb.  And I dislike drinking my “cup of hot urine” when I need to take coral root.  Thankfully the flavor is easily masked with mint, pine needles, or other strongly aromatic herbs that combine well with it medicinally. 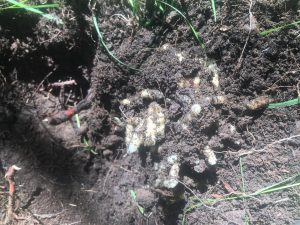 The harvested rhizomes are a PAIN to clean.  If I wanted to get paid a living wage for selling coral root I’d have to charge $20-30 an ounce for it.  I’m not going to do that because I want folks to have access to this herbs that has little or no industrial production and is not widely available.  To clean the rhizomes, root balls anywhere from 5 inches to 10 inches across must be completely broken apart.  Every last little segment of rhizome (each segment is less than an inch long, there are thousands of them in a small ball) must be broken apart, since their style of growth means they have encased huge quantities of substrate and forest debris.  The amount of substrate they can harbor is astounding.  So the entire ball must be tediously picked apart in a container of water, and thousands, if not millions, of little segments must then be washed and virtually scrubbed free rocks and soil.  It took me many back-aching hours to clean about 10lbs of coral root rhizomes in 2020.  And sadly they dried down to just 1 pound of dried rhizome.  It didn’t 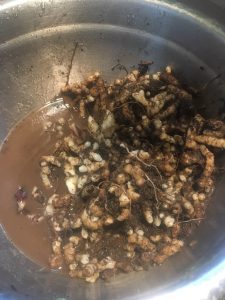 leave much to go around, and I ended up gifting the majority of it to friends in need of herbal anxiety relief.

Moving on, though, to what coral root actually does.
First, as it’s more known for, coral root addresses cerebral tension and can help quiet racing thoughts, agitated moods, and anxious states.  It works via the central nervous system to calm and quiet the mind and body.  I find coral root very useful when I feel overwhelmed, over worked, and bordering on states of mental anxiety.  It’s a reliable way to turn the volume down on all of the mental ‘white noise’ and regain the ability to focus and think clearly.

Coral root is also specific to lung infection recovery.  Weakened immune systems and long-standing lung infections specifically indicate oral root.  One friend I sent coral root to in 2020 found drastic improvement in his condition.  He got COVID in the spring of 2020 and even though he had otherwise recovered, he had a persistent lung infection he couldn’t clear up.  I now know of at least 3 people who have this same complication, where 6-9 months after

recovering they still have deep stubborn lung infections.  This particular friend saw an immediate movement and expulsion of the long-standing fluids with each cup of tea he drank.  I likewise use coral root when I have lung complaints or stubborn fluid in the lungs after an incident or illness.

Additionally, coralroot can be mildly stimulating to menstruation, so best to exercise caution if One is striving for pregnancy.

Because I have rationed quantities of this herb, I typically make 16oz. pot of tea with a small pinch of about a dozen or so segments of rhizome in it.  These segments, once dried, are only a few millimeters in length.  Just a small pinch is enough to give me coral root’s anxiety fighting effects.  In a rush, I’ve even swallowed a pinch of root with water, like pills.  The effects were slower to kick in and not as pronounced.  But it works if making tea isn’t an option.  Back to making tea though- I typically steep the same pinch of rhizomes twice, with the second steep lasting as long as I can let it to leech every last bit of goodness out of the rhizomes. 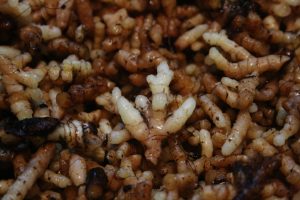 Coral root is relatively safe and benign.  It provides a bounty of benefits that are extra applicable during this pandemic.  I’m not trying to sell you on COVID cures- I don’t even have any coral root for sale at the time of posting this!  My intent is to provide you with another tool in your arsenal of herbal healing.  If coral root sounds like it could improve your quality of life, find a good source to buy from, or better yet, go wander your nearest conifer forest, identify you local coral root variety, and if it’s not endangered, dig yourself up some anxiety relief and lung-healing rhizomes.

It’s worth noting, additionally, that when digging up a rhizome ball, I take all of the ‘buds’ and replant them.  These are thick, thumb-like nodes on the finger-ball.  They are bulbous and often have a small ‘spike’ on them, which is an immature shoot poised to sprout out of the node.  I try to leave these buds with a small amount of rhizomes still attached and replant them in the area so I don’t impede on my local coral 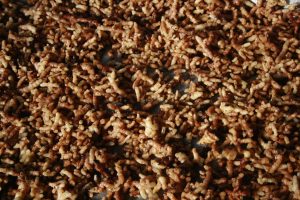 I want to add one cool story about harvesting coral root.
When harvesting, I have found no correlation between the number of flowering stalks present above the surface and the size of the root ball below.  Some huge root systems sport only 1 stalk, and some tiny golf-ball sized rhizome clusters may sport 6 or more flowering stalks.
To-date though, the biggest and most healthy rhizome  cluster I’ve found was symbiotically functioning as an ant nursery!  This rhizome mass was over a foot across.  I mined out only half of it.  It took harvesting the first half to really understand what I was seeing.  I certainly didn’t want to rob the ants of this sweet relationship with the coral root, so I replanted the buds and buried the hole I dug open, leaving the rest of 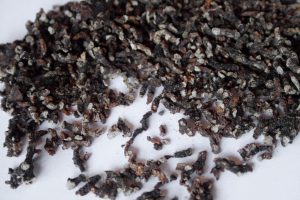 In amongst the rhizomes were networks and caverns of ant brood.  Little nurse ants scurried through tunnels in the rhizome ball.  Tunnels in the substrate lead to and from the rhizome mass to their anthill a few feet away.   Angry worker ants eventually began pouring out of the tunnels as I disturbed the nursery.

I can only assume that this was a successful symbiotic relationship.  It was the largest, healthiest patch of coral root I’ve ever seen, and the ants seemed to be flourishing as well.  I have to wonder if ant feces or carcasses fed nutrients to the rhizomes, or if said waste fed mycelium that fed the rhizomes.  Or perhaps the ants themselves offered supportive nutrition to the coral root via bodily fluids or intentional delivery of physical nutrients.  I’d really like to know!  It was a fascinating discovery!

Categories: All Posts, DIY Medicine
Tags: foraging, herb profiles, herb: coral root, mental health, respiratory health
We also sell on Etsy!
Check out our solid 5-star reputation with over 10,000 sales!
*Our Etsy prices are higher than you will find here due to Etsy's vendor fees.

(Notice there are no ads? We intend to keep it that way!)

***We are currently snowed in and will not be shipping any orders until sometime in March. I will update this notice as the weather changes and conditions improve. Email me if you have any questions :) - Jen Dismiss